Here's the heart of the town...the old church of Santiago...St. James. But it has known better days. 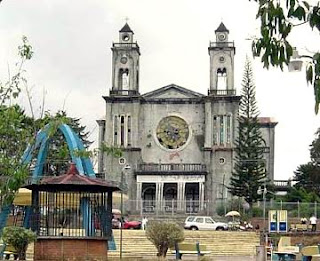 Built on a site riddled with subterranean streams and shaken by the big earthquake here in the 1990s it has been abandoned for a modern church at the entrance to the town and the council has periodically come up with plans for the site, each one worse than the last, starting with a plan for total demolition to provide a car park (!) and ending with a plan to keep part of the nave, close off the street behind, purchase half the block behind that and put up a metal and glass 'cultural centre'.

This is a council which makes you appreciative of the workings of Divine Providence in not placing whelks in the seas bordering Costa Rica....otherwise the council would inevitably have demonstrated its inability to run a whelk stall...and understanding of the provisions of central government that all brewing be a state monopoly....thus preventing the council from proving that it could not run a piss up in a brewery.

Since neither Divine Providence nor central government foresaw rural development, the council is fully able to show its inability to either build or maintain roads by which such development might be reached so, as one can imagine, the project to spend vast amounts of money on an eyesore was regarded as the last straw by most of the citizens.

Still, undeterred by public opinion ....what would that matter, the council was in post for another year by which time the plans would have been fixed...the council ploughed ahead with the full support of the Catholic Church,  a perimeter fence was put up and all the beautiful trees surrounding the church cut down.

There was considerable opposition, but people aren't accustomed, here, to starting media campaigns...not much media to campaign in after all,  or to organise  and fund raise, but the council managed, in its cack handed way, to rally the opposition by keeping quiet about the demolition order it had obtained from the appropriate ministry while pretending to have open debate.

When news of that leaked out people who had been grumbling started to see what action they could take...and a couple of women came up with the master stroke.
At one of the regular Tuesday evening meetings when aggrieved citizens can bring their complaints before the deaf ears of the council the ladies asked what was the state of play about the new cultural centre project.

Oh, it was going ahead...there were plans to have a competition to choose the architect...everything was fine.

When you obtained the demolition order, you had to state who owned the land?

And did you check the National Land Registry?

That the land the church was built on was given to...not you, not the council, not the Church, either.....
It was given to the people of the area. It belongs to us. And unless we consent you can't go ahead.

See if a court agrees.

Aware that courts tend to view local government with scant respect, so far the council has taken no action....the church is still there....and the heat generated has dissipated.

No doubt the new council...same party, different faces...will find a way round this but one thing is sure, they will never be able to persuade the elderly gentlemen that a cultural centre of metal and glass will be a success...