You can call me Prince Monolulu because...... 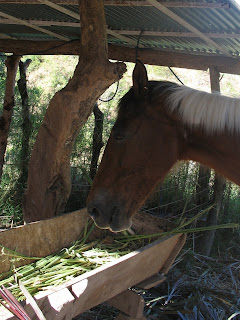 I haven't kept horses for years, so when the chap who rents our grazing for his cattle asked if his peon could graze his horse with them I was only too pleased.
A day or so later the barking of the dogs alerted me to an arrival, which proved to be the said peon with his little boy - hardly older than a toddler - perched on the back of a brown and white mare which had clearly seen better days, walking head down with a rope round her neck as leading rein.
He installed her in the shed facing the house, cut her some camaroon grass, and he and the little boy stroked her and talked to her while she got down to business.

They came every day....Danilo cut and trimmed sugar cane for her...we bought horse nuts....she settled in.
The father had bought her cheaply...she was all he could afford...as he had grown up with horses and he wanted his son to have the same pleasure.
The little boy gave us pleasure too, stroking and talking to his horse...never noisy, never rough, never making sudden gestures and all was well until the day when father turned up with a cattle lorry.

His wife said he was spending too much money on the horse when they had so little to start with. She said he had to sell it.

What about your little boy?

Well, his first lesson about life...don't love something if you're poor.

Father was nearly in tears...it wasn't just his little boy who loved that horse.

We could not see her go off in that lorry, back to a weary round of auctions, underfed, not fed at all....so we bought her and she is giving us a great deal of pleasure, she and the little boy, whose father brings him down at the end of his long working day to stroke her and talk to her.

It's not just philanthropy...the rich gringos.
In the short time since her arrival I had recovered that sense of companionship and complicity that a horse can give...the little nudges, the whickers, the biff amidships when the food isn't coming fast enough.....
The incomparable smell of a horse, bringing back memories of all the years when horses were part of my life.

But if you are not someone of a certain age, not from the U.K. and not one for the geegees you might ask where does Prince Monolulu come in?

As a schoolgirl I lived not far from Epsom racecourse.
Father, being a man for the geegees, was quite happy to book me in at our Australian dentist - another man for the geegees - on the morning of one of the race days so that I missed a day at school and we would set off for the afternoon armed with the racing paper in the hope of seeing home a winner, even though experience suggested that our sure and certain hope would be better centred on the Resurrection than on father's five horse accumulators.

I don't know what Epsom racecourse is like now at the Derby meeting, but when I went with my father there was still just a hint of the Frith picture.

I wouldn't go so far as to say that all human life was there, but there was a fair section of the odder parts of it spread over the Downs, from Gipsy Rose Lee reading your palm in her caravan (modern - for the period) to swing boats and coconut shies, via the boxing booths, the bearded lady and the sanitary facilities housed in a vast white marquee whose function was made crystal clear by the barker at the entrance

'Piddle and poop a penny.'

Raised in the discipline of 'going before going out' however none of our betting budget was wasted on responding to this particular invitation.

Father had his own ideas on the likely winners so was unlikely to take any heed of the tipsters, usually large gentlemen in tight racing silks crouching and flicking whips to give the impression of riding the winner as they worked the crowd around them.
However, he liked to see if the horse he fancied in newsprint was as good in the flesh and so before each race we would go to the paddock to see the runners being led in. But to get to the paddock we had to pass another tipster....

Unmissable in bright jacket with plumes waving above his head, this gentleman seemed to be a permanent part of the racing world since giving a tip on Spion Kop for the 1920 Derby which came home at 100 - 6. Since then, his fame was guaranteed...even his his tips weren't.
Just mention Prince Monolulu to a racegoer and he would automatically reply with his catchphrase