From Peace to Violence...in Hours. 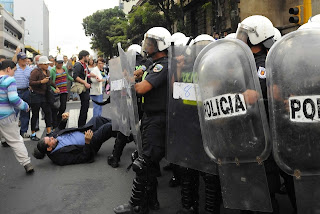 We were driving into San Jose yesterday.

The Men were going to continue work on the house there while waiting for the next instalment of kitchen units from the carpenter...I was going with them to go to the Social Security (Caja) offices to query a rise in our contributions.

First we wanted to check out a DIY emporium for a cooker hood...a quest which made it clear that when developers acquire the rights to land they take no thought for the access thereto.
We finally made it after three dead ends and near heart failure as we thought  we would be going through the toll station twice.

Cooker hood aboard we headed for the centre.
Always a nightmare...this time it was Hitchcock.
Blocked...and not helped by a large bakery van doing deliveries in the lane ahead...it toook half an hour to get to the park by the Merced church on Avenida Segunda, the main traffic artery of San Jose.
There, all became clear...the flags ahead indicated that a demonstration was taking place and that the police had closed the road.

I asked Danilo to drop me there...it would be quicker to walk to the offices which were on that road...while the Men went on to the house.

I caught up with the march which turned out to be people working in and using several out of town hospitals campaigning for money for better services...money which their loudspeaker commentary alleged had been and was being swallowed by corruption by officials and politicians.
Mostly middle aged people, some women with children, only one union leader....a peaceful demo, heading, as I was, for the Caja offices.

The gates were locked on the main road side, but security staff were letting people in by the rear entrance overlooking the gardens so I took a ticket and awaited my turn.

The marchers were outside and the loudspeaker was giving it laldy....you needed to cup your hands behind your ears to have a conversation.

A security guard accepted the petition the march leaders presented, but they were not allowed into the building....and no one from the Caja board of management would meet them either inside or outside, dismissing a march as being no way to negotiate.

I think what was to follow could have been avoided if the Caja board had had the courtesy to meet the march leaders as the demonstrators would then have dispersed.
As it was, the marchers stayed on the road, blocking it completely and San Jose's traffic - which flows like treacle at the best of times - was almost at a standstill.

Query answered I went to have lunch with The Men and came back via the Caja offices just before 1.00 pm, surprised to be following a running file of riot police...plainly these were the reserves as their clear shields only bore a piece of packing tape with their number written on it in ink as opposed to the official 'Policia' shields borne by the front liners.

On Avenida Segunda the riot police had succeeded in pushing the marchers to each side of the road and were holding the line of the pavements. Pedestrians coming from side streets were allowed to cross and cars were starting to come through as the traffic police, the Transitos, brought up a winch lorry to haul the marchers' loudspeaker van away.

I've been at a number of demonstrations in my time and the atmosphere on the pavements...from marchers and onlookers alike... was one of good humoured resignation, broken by cheers and shouts of support for the man in the loudspeaker van who was, by this time, holding forth at length on the iniquities of named politicians and giving it as his view that the current government were trying to run the Caja into the ground as an excuse for privatisation.
He was playing the national anthem when the Transitos applied the chains to his van....and the cheers of support broke into gales of laughter as the winch lorry moved majestically forward and the chains parted, leaving the van where it was.

I went off. Another winch lorry had succeeded in hauling the loudspeaker van away and people were beginning to disperse.
Everything was peaceful, traffic was beginning to move....the drama was over.

So how was it that some hours later the road was again blocked...riot police were charging demonstrators...and opposition politicians were involved in violent altercations with the police?

Because some officious policeman had rounded up eleven demonstrators for blocking traffic and this brought not only the original demonstrators, but students of the University of Costa Rica and passers by back onto the road to protest at police brutality.
The politicians said they were there to negotiate with the police and thought they had arranged the release of the eleven....the release agreement was denied by the police chief in charge of the scene and protesters started throwing the contents of roadside waste bins at the police.
There were more arrests, jostling, injuries until the street was finally cleared in the early hours of the evening.

How had this happened in a country where people will do amost anything to avoid confrontation?

Corrupt institutions have been a fact of life in Costa Rica for years....but now people are no longer relying on colluding newspapers and television for their information. They have mobile telephones...they have the internet...and despite the draconian criminal defamation laws they are using them to good effect.
Whistleblowers have emerged in government departments....which has brought about a law against divulging 'secrets'...not just those of national security, but the dirty little backstairs secrets of collusion on contracts, ministers 'forgetting' to pay their taxes....with a maximum penalty of ten years in the jug.
The law has been taken to the Constitutional Court, the Sala Cuarto, where it is hoped it will be thrown out...but it indicates the government's response to public disquiet.

The classic Central American government response. Crush it.
Posted by the fly in the web at 15:27