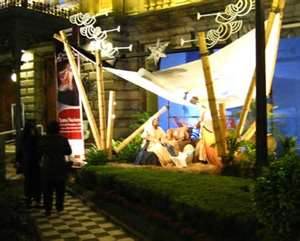 The tradition of the Christmas creche is widespread in countries with a Roman Catholic cultural background and Costa Rica is no exception.
Public buildings, like the Teatro Nacional in San Jose. have the creche, or 'portal' set up either outside - the weather being clement - or inside.
Banks and offices also create their portals and the approach of Christmas is the sign for children to ask that the home portal be set up, the figures approaching the manger day by day.


My favourite, though, is this one set up by a friend; an artist in wood and paint, a postman in his day job, while he was building his new house last year..... 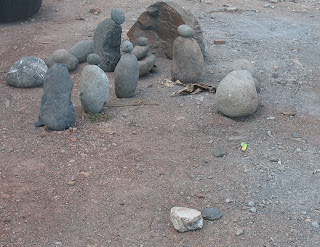 Amid  the mess and the detritus of a building site, he made this portal for his family, to make it really Christmas....and I discovered it on being invited, as every year, to his New Year celebrations.

For that event it didn't matter that the house was unfinished as everything took place outside to accomodate the assembled pack...family, friends, waifs and strays all perching on chairs brought out for the elderly or on logs, stones and building materials for the rest: the elderly ladies refusing (for form's sake) to believe that the wine was not fruit juice and glugging away happily; the children playing with the dogs; the beer circulating, plates of food on the trestle table and the television brought out to add its contribution while waiting for midnight and the national anthem.

The centrepiece was the fire...with a vast cauldron perched on breezeblock in its midst where lard sizzled, awaiting the plantains, potatoes and pork pieces - chicharrones - which would form the main event of the feast.

The master of the house is also a master cook of chicharrones and served his offerings at midnight as the anthem blared out and the skies around exploded in fireworks.
Hot food, cold beer and good company to celebrate another New Year...what would it bring?

It has been, on the whole, a great year...good news on my husband's health,  The Neighbour hammered by the court, the work on the house in San Jose advancing and plenty of discoveries made in what is still our new life.

There has been a downside, though, which has made blogging less of a pleasure than it used to be....the stalking by those who want to know what we are doing by the backdoor, as it were, rather than doing the normal, open thing of using the 'phone or e mail.

I'd hoped we were done with that, but I was mistaken as I discovered when one bright spark telephoned my mother to find out whether I was actually in Europe or whether, as he said, I was using the blog as a red herring.

There are limits, and having a woman in her nineties bothered by the unpleasant obsessions of others is one of them. It also made me aware of the number of times I had decided not to write something beause of the eyes at the keyhole and I have decided not to continue with this blog...nor with French Leave. The pleasure is tainted.

You have given me so much....friendship, support, information...opened my eyes to so much,...and I am very grateful.

I will continue to blog elsewhere....and would be delighted to give you the new address if you would care to e mail me.