The season of goodwill is with us..... 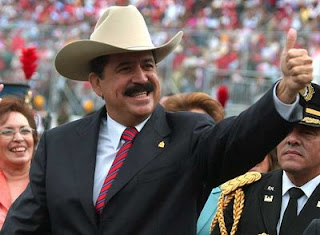 It has to be...the difficult neighbour has not...yet...cut off the water supply to the thirty households and businesses which use it.

He is a gentleman predictable in some ways - general bloody mindedness - while unpredictable in others - you know he's going to do something but when and what is another matter.

He was his father's favourite and in order to cut out the rest of his brothers and sisters from the inheritance the father sold him the main family finca of over two hundred hectares at an undervalue.
That was some twenty years ago and in that time he has managed to reduce the number of hectares from two hundred to eight and makes a living by transporting cattle from the local auction.
Still, to mark his status as a landowner he wears a hat...not the floppy sombrero of the worker, but the crisp white hat with curly brim worn by those buying and selling the cattle he can now only transport.

However, while of impeccable Costa Rican lineage, his attitude to property and money is closer to that of Papua New Guinea...where you might well agree to sell your property but when you have spent the money brought in by the transaction you want the property back.
After all, it was an exchange, was it not...money for land? So when the money no longer exists you get the land back.
Simple when you think about it.

So he thinks of himself as the owner of the one hundred and ninety two hectares which have been sold off over the years to fuel a life of drinking in bars, entertaining ladies other than his wife and consequently being obliged by the courts to support his illegitimate children........ while those legitimately occupying the one hundred and ninety two hectares are, in his eyes, squatters.

Every so often the injustice of it all overcomes him...especially when his current lady friend has deprived him of her favours until his financial affairs improve...at which point he goes for the water supply.

This supply was originally put in by his father, who had a state licence to extract water from the spring high up on the mountain which dominates the three valleys below.
It originally served only his finca but, as land was sold off, each new proprietor had access to the system, through a series of tanks and pipes, carefully categorised by inch, half inch and quarter inch rights.

There are a number of users, as the original plots sold off have become split up in their turn as families expand and build houses for their children. A pig farm has been set up and one chap breeds tilapia.

By law, the owner of the licence cannot charge for the water supplied to others...water is a natural resource...and the neighbour became frustrated when even those unwary enough to have paid him once were put wise and refused further payments, so he decided not to pay the annual fee for the state licence...a sum so small as to be risible.

So, the current state of play is that no one has any proprietorial rights to the water...but his view is that the water, like the land, is his to do with as he pleases so when vexed with the injustices of life, when the contrast  between the status denoted by a crisp white hat with a curly brim and the reality of driving a lorry for a living gets too much he takes action.

If he is fuelled by drink, he just goes up to the top meadows and opens the taps in the field used for cattle...thus cutting off everyone below including himself.
If the dibs are not in tune and he cannot afford drink, then he goes right up to the source and blocks the main tank....same consequences as to water cut off, but this gives him the chance to work down the mountain from tank to tank, pushing wooden bungs into everyone's pipes so that when some of the men go up to clear the first blockage, all the others remain, with all the consequent problems of air in the pipes to be cleared before everyone is supplied again.

He is a perfect pest.

He has always reckoned to get away with this because in Costa Rica it is next to impossible to take regular court action unless he has been seen by someone..and he is always careful in this respect....but he has not reckoned with the domestic violence courts, set up to protect women, children and the elderly...courts set up to combat the machismo element in Costa Rican popular culture.
These are relatively new...so had never entered his consciousness....and when one lady had had enough of not only the water problem but also of his shouting insults at her and took him to court, a whole box of troubles opened for him.

The insults, the threats, the O.K. Corral scenes with machetes and revolvers, the contamination of the water supply, the blockages....the baggage of years came tumbling out as one person after another joined in to support the first lady.
While a lot of it was not admissible in evidence, the lawyer representing all parties managed to get a lot in under the line.

The neighbour was beside himself.
How dare these inferior beings, wearers of sombreros, confront him, the wearer of the crisp white hat with a curly brim which, inevitably, he was wearing in court.

The first duty of the court is to seek reconciliation and when the judge turned to him to ask him if he were willing to participate in a reconciliation process he threw a fit, shouting insults and abuse...his lawyer was so worried that he would attack the judge that he physically held him down in his seat and told him if he did not control himself the lawyer would leave him to his fate.
His conduct made all the points needed for the judge to provide everyone concerned with protection orders, forbidding him to enter their property or to speak to them.

He will, of course, because he has no control of himself....but, for the moment, peace reigns upon the earth in our small corner of Costa Rica.

Thanks to the anti machismo courts.
Posted by the fly in the web at 13:38