I'm off to Nicaragua in the morning....

We have just seen the most wonderful house in Costa Rica's capital, San Jose...and we are running away before we get out the cheque book and go for it.

Its roof looks distinctly permeable...the fact that the agent refrains from showing the interior in his publicity reinforces this suspicion....the wooden walls look as if only the paint is holding them together....we have no idea what lies behind it...and it is outrageously expensive!

As against that it is in the old centre of town, a quiet area of parks and museums and within walking distance of the markets and shops we like to frequent. We have often talked of having a house in San Jose, just to ring the changes from life in the countryside, and walk around likely areas, looking for 'For Sale' signs.

Well, walking past the Foreign Ministry, the Casa Amarillo, we saw two.
One was advertising a tiny house, some one hundred metres square, with beautiful original tiles and gilded woodwork....but no garden, not even an internal patio, so even as a pied a terre it was off the list of possibles.
Then, turning the corner past a wall of twigs which conceals the Cinco Hormigas Rojas B and B which advertises itself as the only rainforest B and B in San Jose - a claim unlikely to be in dispute - we saw the house.
Two storey, wooden construction, tin sheeted roof with gables and a recessed porch with pillars.
Dilapidated beyond belief.
Irrestistible.

If we had sold the house in France we would, I know, have been on to the agent as soon as we reached home.
But we haven't sold the house in France. There's been interest, but all from people trying to sell their own places first...an endless chain that always breaks somewhere.
Perhaps it is as well, as we have been forced to pause for thought...not generally a factor in our house buying policy!

If we go ahead, it will take every spare penny we have just to buy the place, let alone to think of doing anything to it and leave us vulnerable to financial shocks...something we have determined never to be.
It will inevitably be subject to luxury house taxation, even before being renovated, just because of land prices in that area of town.
At our age, we must be off our trolleys to even to think about starting on a major renovation.....without knowing builders, electricians and plumbers, with having to hire a guard to prevent building materials from being stolen while the work progresses, with not living on site and having to travel in each day to control progress.

We know all this, but the temptation is severe. There is nothing like bringing a house and garden back to life, making space, light and colour work together, and when a building is not on the register of protected properties it is possible to do this without being tied down to detail.

I have not forgotten the experience of trying to convince an Architect de Batiments de France that we could put a glass roof over part of a ruin to make a vast green house.

Why not? There are glass roofs and skylights all over that part of town. Your predecessor put one on the roof of the chateau stables, one block away from our house. Furthermore, no one can see it, given the situation.

So the chance to get to work on a building that allows us to respect its style without being obsessed by it is a temptation indeed.

However, we have to be realistic. Every factor is negative.
The money would be a strain.
We are no longer young.
We're working in the unknown.

But, blast and damn it all, the worst is having to accept that we are past it!

So we're off to Nicaragua tomorrow on the early bus....off to  Matagalpa, the Pearl of the North....to lick our wounds among friends. 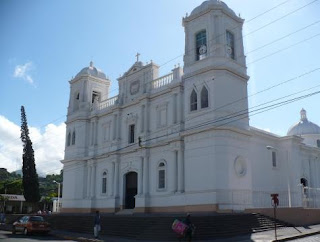 To eat pork cooked over a charcoal brazier at one of the stands by the cathedral.
To visit the more of the petrogylph sites.
To drink Toña beer in a glass straight from the freezer.
To get away from temptation.


There is, after all,  no fool like an old fool, and in this case two fools' heads are no better than one....so we're running away to Nicaragua to save ourselves from ourselves..
Posted by the fly in the web at 14:00