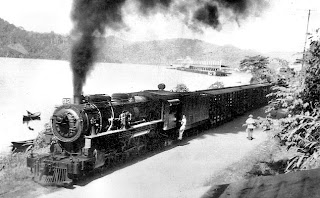 This photograph, which I owe to the blog of Pedro Erik Wesson, shows a steam locomotive in its pomp working the tracks in the south of Costa Rica in the 1950s.....when Golfito was the port used by the American United Fruit Company to export produce from the region.

I've loved steam engines since I can first remember, not just locomotives but all and any of them...beam engines, steamrollers, paddle steamers...you name it.
But then I grew up in a period where steam had not yet abdicated its rule....mighty steamrollers with the driver perched high up in his cab worked the roads, with foolish boys throwing pennies under the rollers and looking half delighted, half aghast at the results.

Dr. Beeching still worked for ICI and steam trains of all shapes and sizes roared or snuffled their way from end to end of the country, from the great expresses to the slow trains, serving quiet country stations. Not quite 'Oh Mister Porter' and Buggleskelly station....but not that far from it either in some cases.

Placed in the care of the guard for the journey to Glasgow on the Royal Scot no journey could begin without the ritual visit to the mighty locomotive at the end of the platform, the driver and fireman smiling down at the children gathered beneath them, the expulsions of steam indicating that the beast was ready to go....
Peering through the window as the train took a curve...the bridal train of white steam running back over the carriages -
The tunnels where it behoved you to close the tiny window panel if you were not to undergo the castigation of the aunts' reception committee when alighting with your white collar marked by smuts...

So what has all this to do with Costa Rica?

Well, we took a trip to Golfito in a light 'plane....
The company had a mad promotion of a trip for five dollars so we plumped for the south, thinking to go on to  botanic gardens on the Panama border.
As it turned out, the weather turned to persistent, heavy rain on the second day so the gardens will have to wait, but on our first evening we took a walk along the shore and came across this: 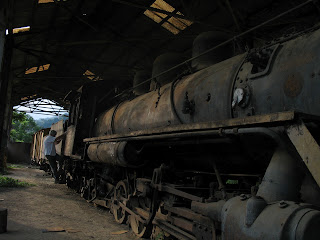 Standing idle, abandoned, rusty, this is the very train from the photograph at the head of this post. I reckon it has been there since United Fruit pulled out in the 1960s...the pursuit of profit being more important than the economy of whole region. No adjustments, no compensation....just upped and went.

There is something unwholesome about American colonialism.
First, the denial that is it colonialism.
Second, following from the first, that no consideration has to be given to the colonised...as it is, after all, not the affair of government but that of business, which knows no morality.
Third, the willingness of American government to interfere in the governments of countries in which American business has an interest.
And fourth, the total unwillingness even to try to assume Kipling's 'white man's burden'. Decried as it is, there was at least a sense of responsibility underlying it.

To try to revive the area, the Costa Rican government decided to attract people there to shop....

They set up a duty free area...the Deposito Libre...where people could buy goods at reduced prices.
These days, you can buy one thousand dollars' worth of goods twice a year.
You have to take a ticket on day one, stay overnight - which helps the B and Bs and the caffs - and shop the next day.

All clear and simple you would think. But suppose you want to refit your house...it will cost more than one thousand dollars. Do you come back in the next six month period?

Of course not. This is Costa Rica.

Inside the Deposito Libre are any number of ladies and gentlemen of the area who, for a small consideration, will let you use their tickets.
If you are on a spending spree you go to the checkouts accompanied by enough ticket holders to make up a crowd scene from a Hollywood Biblical epic and no official turns a hair.

So, unlike poor old train number 82,  Golfito is still steaming along nicely.