With a Bimbo in his arms and a Gleam in his Eye...I blame Gordon Ramsay 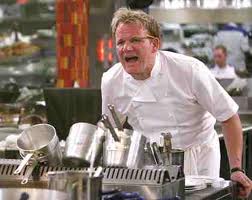 Mr. Fly is a man for gadgets.
Not the ipod, ipad and ipoke sort of thing, luckily, as both of us are defeated before we start by things with buttons to press.

The mobile telephone spends more time being hurled away in despair than it does being used...because we don't know how it works.
It can - and does - play music at us, display a calendar worthy of an optician's bottom line, show imperative messages when its owners want more money, but as for calls...forget it..
It makes a noise like an authoritarian frog when the inevitable wrong number appears on the screen and on the rare occasions that we recognise the number the caller at the other end has given up by the time we work out which section of which button to press.

So he is attracted by nothing covered by the generic term 'implode'.

Kitchen gadgets are the favoured species.

I have lost count of the times I have been presented with a machine for cutting onions which always seems to involve persuading the onion to plop into it at the right angle and then risking permanent damage to the wrist while trying to force the cutting part through said onion.

Corkscrews. We have an entire battery of implements for uncorking bottles, from models made from 1914-1918 shell cases, via things with two handles which involve making sure the bottle is on a non slip surface, Swiss army knives and two pronged butler's devices. The only thing so far lacking is a sabre for the champagne.

Fruit juicers are in disfavour after it was discovered that the expensive Braun model took more time to clean than it took fruit to ripen, but in its brief span of life between leaving its carton and entering the kitchen cupboard it left its mark in local folklore.

We had picked the grapes on the vine round the house and I had them in the kitchen ready for making jelly.
The Braun, not yet in disgrace, was on the worktop.
Someone who shall be nameless decided to make grape juice.
The combined efforts of the Nameless One and the Braun resulted in a decor with a strong emphasis on purple and it was at that moment that Gaston appeared in the doorway with a bucket of lettuces for us.

Oh no, he said, coming forward in fascinated horror.

You'll never make wine like that...you'll be here a twelvemonth.

Attempts to convince him that we were making grape juice got nowhere...
Who would make grape juice when you could let it ferment and have something worthwhile.

We hadn't long moved to the area  and to distinguish us from other British immigrants we were thenceforward referred to as the ones who tried to make wine in the mixer which at least was one step up from the couple referred to as the ones who were discovered in their underwear in the church.
They say they were sheltering from a thunderstorm. The village was not convinced.

I have had long warning of the new gadget.

The standard of sausage roll in the caff across the road from the San Juan de Dios Hospital had suffered a noticeable decline....the pastry having won its battle with the filling...so Mr. Fly cast an eye over the choices made by other customers and decided on a toasted sandwich.
The filling here was romping home by five lengths.....lettuce, tomato, ham cheese....
It cast the poor sausage roll into a shade more like Stygian gloom.

From then on, the toasted sandwich was the snack of choice, comparisons between the produce of various caffs being made and close attention paid to the items of which they were comprised.
You want the equivalent of a Michelin rating on the toasted sandwiches of San Jose...look no further.

So it was no surprise to find a toasted sandwich maker among our other purchases at the duty free store in Golfito.
It was duly delivered to the house in San Jose and brought home.

I've never had one of these gadgets, so, wondering what the little plastic cup was for, I read the instructions.
This was a mistake as they were generic for several models and mine had an unexplained green light as well as the red one mentioned in the text, so I decided to ignore it.

The hotplates washed and dried and anointed with cooking oil, we are ready for the off.

This is where the baleful influence of Gordon Ramsay comes in.
At the advent of every new gadget, Mr. Fly assumes control of the kitchen.
Things are reorganised....working methods overturned....explanations are demanded as to why I keep the alarm clock on top of the pickled onion jar.
The answer - because I can see it there when I'm timing something - judged to be inadequate.

The ideal position for the sandwich maker being the spot where I keep the slow cooker the latter is thrust into my arms and, in extremis, I put it on top of the oven housing.
I shall, no doubt, be wondering where it is later....

The fridge had been ransacked among cries of

What are you keeping THAT for?

An array of items stood ready.

I cut four slices of bread.

NO! Not slices! They just cut the loaf in half...

Well yes they do, but their loaves are the Costa Rican equivalent of a baguette and we were dealing with a torpedo shaped wholemeal number.
Still, in the spirit of the Light Brigade, mine not to make reply, mine not to reason why even if I was pretty damn sure that someone had blundered, I cut the torpedo in half crossways and in half again lengthways and awaited the next instruction.

Butter the outside. Outside buttered.
Lettuce, tomatoes, cheese and mayonnaise. Duly applied.

I open the lid, plonk the torpedoes on the bottom plate and cannot close the top.

With cries of frustration Chef replaces me at the hotplate but cannot close it either.
He then demonstrates with a wooden spatula how to poke the torpedoes to the back of the plate with one hand while squashing the lid down with the other.
It still doesn't close, but I suppose it sticks to the batter as it does not rise again.
Chef retires to the balcony warning me not to let the sandwiches burn.

Torpedoes duly toasted we ate them and, though the bread to filling ratio needed attention (let no one mention the sausage rolls) they were surprisingly pleasant.

We returned to the kitchen.

I suppose you'd better use those slices.
Oh, and you can use this up.
'This' being the remains of a smoked fish dip I had made for  lunch the previous day.

Sandwich assembled, toasted and tasted.
Absolutely disgusting...the dip had deconstructed itself under the action of heat and had become fishy primeval slime.
I now understood the purpose of the plastic cup.

I said you shouldn't use slices.

If I take the toaster into San Jose, Danilo and I can have toasted sandwiches for lunch on two days......that will save eight thousand colones! The toaster will pay for itself in two weeks!

So, on the Thursday morning the toaster is packed up together with butter, cheese, tomatoes ham cheese and mayonnaise and whisked away to the renovation project.

On  Thursday night I telephone to ask how went the day.

How?. Didn't you make a toasted sandwich?

Well....I bought a baguette - the way they do it here.

Well, it went all soft and squidgy......they can't have cooked the bread properly....it was like a lump of lead...

But you ate it?

Well, yes. I'd made it so I ate it. And then Danilo pipes up and tells me I should be making it with sliced bread.

So will you?
Thinking that in this household sliced bread is usually regarded as being akin to the Beast of Revelations, something against which the door is securely barred and bolted.

I'll give it a try. I haven't bought this machine for nothing....

How was the toasted sandwich?

Much better...they must have industrial toasters in the caffs to do those baguettes...I got a bimbo and it worked like a dream.

While thinking to myself that in the estimation of most men things work like a dream with a bimbo on the scene I was a little surprised.....
Up to that point Mr. Fly's oft stated view had been that, taken overall,  the expenditure required to maintain a bimbo was well out of synch with the gratification afforded by said.

And then it occurred to me.....the leading brand of sliced bread in Costa Rica rejoices in the name of