News from the Front

A pair of Costa Rican oxen (Photo credit: Wikipedia)The Men having departed for three days in San Jose, I settle down to a cup of teabag tea and contemplate the possibilities before me.

The pile of assorted boxes occupying the bench in the porch...each containing something vital (according to The Men)  and not to be disturbed?

Throwing out tee shirts so holey as to qualify as righteous, snaffled from Mr. Fly's horde of working clothes?

Just for a bit.

Blogging it is then....just for a bit.

Mother has surfaced after her Olympic stint in front of the television.
I don't know how the BBC organised coverage for the home audience, but she seems to have watched everything from archery - 'someone blind won' - to beach volleyball - 'disgusting!' - and hugely enjoyed the athletics.
She also enjoyed the sight of the Mayor of London, Beastly Boris, stuck on a wire with a flag in each hand - 'they should have left him there'......

She is now preparing for the Paralympics so I copped her order for shopping online to refill the fridge and freezer, only wishing there was a slot on the online form to indicate that her rib eye steaks had to be thicker than last time.....

We visited an American friend in the week.
He had wanted to take his Costa Rican lady friend on a trip to  Europe.....she wanted to see Paris and they were going to use our house as a base.
They were going to travel via Spain...even he can't stand travelling through the United States and, anyway, his lady friend will not be issued a visa - not even to transit the country.
She's not engaged in the narcotics trade, she doesn't want to work there, she's not a member of any terrorist organisation....but she can't get a visa.
Thus Europe via Spain.

Before booking his tickets he thought he'd check any visa requirement for France.
No...no visa.
But there had to be assurances that he and his lady friend would not become a burden to France while staying there.
The attestation d'acceuil.

This basically is a guarantee undertaken by people hosting visitors from abroad that they (the hosts) have sufficient means to cover the visitors at the rate of the daily official minimum wage for the duration of their stay.
He asked me if we could deal with this, so I downloaded the form.

Perusal made it clear that I could not help him out as the form had to be presented at the mairie (local council offices) in person.
That person to be armed with I.D., a copy of the tax assessment for the previous year, a recent utility bill and prepared to allow an inspection of his or her premises to assure the salubrity of the accommodation.

Faced with this news our friend grabbed the telephone and rang the consulate.

'This cannot be right!'

'But how do you expect to attract tourists?'

So if you want to become an illegal immigrant in France, don't bother swimming the Med or bribing someone to smuggle you across the border in a lorry....just book a hotel.


We went to a garage sale in the town along the road....much more populated by expats than our own....where a family was returning to the U.S. and selling the stuff they did not want to ship back.
Garden tools had been advertised, plants and, irrestistably, books.

Danilo drove and I was in charge of directions so we arrived safely despite coming from the opposite end of town to that envisaged in the instructions by dint of firmly quashing any suggestions that we ask someone the way. 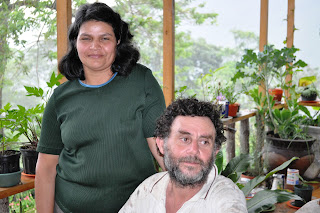 This is Danilo, pictured here with his wife. Tell me...is there anything remotely frightening about this man?
No, I thought not.

So why, when he came to the gate with us did some stupid woman shout out

And belt inside for assistance?

All too indicative of how some expats regard the people among whom they have come to live. Any Costa Rican woman must be of easy morals, any Costa Rican man a thug.
Perhaps if they learned some Spanish this misapprehension might be lifted.

These expats seem to live in fear....I remember telling one that we were going to visit Granada in Nicaragua and she solemnly advised me to walk in the middle of the road to avoid being dragged into doorways and mugged...or worse.
Preferable to be run over, I suppose....

Once inside we soon found the plants to be priced as if being bought from a nursery, the tools as if being bought new.....and the books dirt cheap.
Priorities, I can only imagine.
But I did buy a copy of The Golden Bough. I left mine in France and miss it greatly, so it was like taking an old friend home with me.

I have also had news of The Neighbour, who has been relatively quiet lately apart from firing a revolver outside his house in the evenings.
No one knows whether he is deterring visitors or warning people that he is not yet a spent force.

Dona Mery's sister runs a caff by the main petrol station in town, frequented by The Neighbour when he has been unable to entice a woman to live with him and cook his meals. Left to himself he exists on whisky, rice and plantains.
He was in the caff with his daughter and her little girl, when a man came in for a takeaway.
The Neighbour waxed obnoxious.
The customer returned the compliments. Fists were waved. The tone rose.
The little girl started crying.
Her mother pulled The Neighbour out and into the car.
As he got in he made a remark ahent the morals of the customer's mother with the result that the customer lunged forward and planted a mighty blow on The Neighbour's face.
The Neighbour roared away, shouting that the customer could think himself lucky....had the child not  been there, The Neighbour would have torn him limb from limb.

So far, par for the course.

But a couple of days ago The Neighbour came across the customer while driving in the Three Valleys. The customer was alone.
The Neighbour jumped out of his car, drew his machete and went for the customer who was unarmed apart from a stout stick.
He managed to knock the machete from The Neighbour's hand, threw it far into the undergrowth and, as The Neighbour got back into his car and drove at him, he picked up a huge stone and lobbed it at his windscreen.
Luckily or unluckily it did not break, but it gave him time to reach the nearest house.

He won't do a thing where there are witnesses, but get someone alone and he's a devil.

So whats the customer to do?