UFOs and R and B 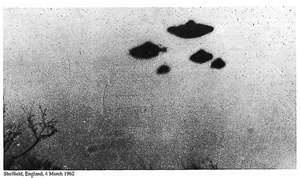 I have never seen an Unidentified Flying Object.....

Things flying in my direction over the years have been cricket balls with shouts of 'catch it'....
A poodle thrown at me when I complained about the way it was being treated with cries of 'take it' (I did )...
A pair of worn out trousers (relic of old French tradition of rough music)...
A bag of used nappies (returned to sender)....

All of which I had no problem in identifying.

Any more than I had problems in identifying things I have sent flying in my turn.....
Cricket balls....
Plates...
Palets....

But I do know what a UFO is.

In my household it is the thing in a bag which emerges from the depths of the freezer like Grendel's mother seeking revenge.....
An Unidentified Frozen Object.

Under normal circumstances the things I have shoved into the freezer in a hurry stay where they were put...in the fast freeze section on the right hand side. A collection of mis shapes from which to avert the eyes when diving in for something more mainstream with a label.
Occasionally I will  defrost a few of the mystery parcels  and make something with the contents, which has given rise to some unique combinations - the results passing muster on the home front on condition that the haphazard nature of the selection principle remains a dark secret.

No man wishes to know that, rather than lovingly crafting his evening meal from choice ingredients, his wife has been frantically searching the web for combinations using the parsnip,sweet peppers and chicken liver which met her gaze once the ice was off the plastic.

This week, the UFOs manifested themselves in decided manner when Mr. Fly assumed control of the kitchen.
Well, not the kitchen, exactly, more like the menu planning.
Executive chef....not chef de plonge.
He is, it appears, tired of rice and beans for lunch.

So am I, but as Danilo has lunch with us and Danilo cannot contemplate life without rice and beans figuring largely in his diet, rice and beans it is. Not every day...but often.

A typical Costa Rican housewife would tart up the R and B with beef in sauce, or fried chicken or fish, or a pork chop, or a slice of steak, accompanied by cabbage salad, a 'picadillo' of potato, chayote or plantain mixed with diced peppers and onions and optionally some pasta in sauce - all of which explains why they are up at the crack of dawn to fit in cleaning the house and cooking the lunch.

Not signing up to this agenda, I compromise.
We will have cassoulet...with some rice for Danilo on the side.
Or risotto.....with beans ditto.
Anything Chinese with pineapple will be acceptable, as will spaghetti bolognaise, as exceptions to the R and B, but for a potato addict like Mr. Fly it is all too much.

There would be changes.

He assembled the cookery books and spent an evening muttering
'Why did we buy this...?'
or
'Rubbish!'
or
'Crap!'

Those classed as acceptable were then studied in more depth while I replaced the discarded numbers on the shelves.

There was silence but for the turning of pages and the occasional cry of
'How'd they expect me to get oysters in Costa Rica!
Ditto 'salmon' - well you can, but it's flown in from Chile at vast expense.
And as for 'lamb'...forget it.
I once saw a leg in one of the high end supermarkets. It was greyish in colour and resembled a cross between an emaciated rabbit and a surgical stocking. It cost the equivalent of twenty pounds.

Ah! Stewing pork!
A lunge into the freezer to extract his prey upset the delicate balance of its contents.....and the UFOs poured down  into the main section.

What's all this stuff?
Now in English law, should a defendent not speak, a pre trial trial would be held to determine whether he or she was 'mute of malice'....in which case he or she could be enthusiastically tortured until saying something...or 'mute of visitation of God', in which case everyone would be disappointed.
My lack of reply could be argued as being in the latter category,  in that I could think of no generic term for the avalanche of little plastic bags of odds and ends now covering the pork section.

Luckily attention now turned to the fridge, where yogurt was discovered, maturing happily behind the cheese mountain which is unwrapped every day, coated in fortified wine and wrapped in fresh cheesecloth to produce something worth eating at the end of three months.

The spices were inspected...a note made to order fenugreek on eBay.

The lunch menus for the next two days were announced.

Day 2. Fabada. Of which the principal ingredient is...beans.