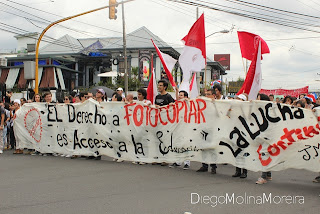 Laura Chinchilla, President of Costa Rica, should be wearing a hazard suit as she surfs a wave of polluted water in the latter half of her term of office.
Declaring herself as 'firm and honest'  in her election campaign was tempting fate...and fate never resists temptation.
So we have had scandal after scandal.....finance ministers who 'forget' to comply with tax laws....the whistleblowers threatened with legal proceedings...wives of ministers running lucrative consultancies which mysteriously always win the contracts awarded by...ministers....(so far just like Europe, but people make a fuss  about it here)....but most of all the stench arising from the building of the new road along the Rio San Juan which forms the border with Nicaragua.
Two committees overseeing it..one official, the other, run by her totally unqualified brother, with more power than the first......Transport Ministry officials living suddenly high on the hog....contractors who think it's a good idea to fill low lying parts with container bodies covered with logs which promptly collapse once wieght is applied....and enormous environmental damage.
Proclaimed as a means of securing the borders...and bringing electricity and communication to remote settlements....a cynical section of the population wonder if it was not rather to use public money to open up estates bought by politicians who think there's a fair bet that Nicaragua will succeed in building a transocean canal there.
So with all this going on, you wouldn't imagine that a little photocopying would bring more problems around her head.
No,she has not been photocopying parts best left private.....but she has exercised her veto on a law protecting intellectual property....with the exception made for copying material for educational purposes.
The firm and honest Presidenta will make no exception. No photocopying. None.
Coming from rural France where if a document had to be supplied in triplicate you were getting off lightly, I was not surprised to see so many general shops and specialists offering photocopying.
I was surprised at how cheap it was, though!
And then I noticed how many schoolchildren, students and teachers were in the queue.
Administrative demands for copies are few....their offices have photocopiers.
Educational need for photocopying is vast.
Forms, worksheets....and textbooks.
This was the subject of the exception...to allow photocopying for educational purposes, recognizing that schools...and universities...just don't have adequate supplies, and that the cost of books is prohibitive for all but the offspring of well off families.
The exception that the Presidenta vetoed.
And the students protested...as per photograph up top.
Unfortunately a peaceful protest was hijacked by those with other agendas, resulting in policemen being injured and one politician soaked when a bag of urine was thrown at him, but, luckily, everyone seems to realise that this was not the intention of the protest organisers and the debate is on.
A textbook author has worked hard to produce his tome.
His publisher has put money into printing, publicity and distribution.
Is it fair that students can profit from their efforts simply by copying it?
Will not authors and publishing houses just fold their tents if there is not an adequate reward?
But what of the students?
Even in my day, when university libraries were funded to the hilt, there would not be enough of certain texts to go round...so if you had not bought your own you were jostling for a sight of it.
Students were even  known to get to the library as it opened as essay time approached!
But we either had money from parents or grants...or both... and I found it was perfectly possible to buy all the textbooks on the reading lists and a fair few others without breaking the bank or reducing the incidence of visits to the Student Union bar.
I'm not sure what I would do now when the fees are high and the prospect of a student loan threatens to blight the rest of your relative youth., but I suspect I would do what I always used to do - something which appears to be a dying art among students.
Take notes.
Taking a note, reading it back and checking that you have all the elements is good training when using the information in essays and for having revision material for examinations.
It's not bad training for most things in your working life, either....but less and less students seem to be able to do it.
Instead they seem to cling to the text, the whole text, and nothing but the text, feeling that wholesale regurgitation is better regarded than a summary of the points.
From what I saw of education in France they might be right...I suspect it is similar here but don't know enough yet to say.
But even taking notes is not a solution if your library doesn't have copies.....and you don't know anyone with a book you can borrow.
I don't have a solution fair to both parties...though I think perhaps publishers could licence a reasonable amount of copies per year to educational establishments....so if I have to plump for sides then I suppose I'd go with the students....
Or to suggest to the firm and honest President that it might be an idea to fund education properly...and transparently.
Though I could make that suggestion to leaders of countries far better off than Costa Rica, too, where it seems that feeding the faces of the your cronies is more important than feeding the minds of the young.
﻿