From morning to night.... 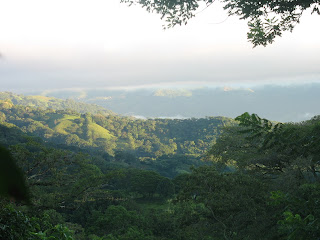 This is how my day starts....the view from the balcony at five thirty in the morning.

Why so early? Because by six thirty at night it will be dark and there is a lot to pack into the day.

First, breakfast. I have not and probably will not adopt the local staple...gallo pinto with either eggs or sour cream. Gallo pinto? Precooked rice and precooked beans spiced and mixed together to give a speckled appearance, like a cockerel's feathers, thus the name. I've eaten it with pleasure, it is tasty, but I'm stuck in my ways so it is bacon...bought in the slab and sliced on the commercial slicer we bought years ago in Belgium...and eggs from our own ducks and hens, or porage, or just a soft boiled duck egg. And then it all gets going.

Let out the young hens, keep the layers and the laying ducks inside, let out the drake...an obnoxious bird...and try to chase the 'ostriches' - bantams with naked necks and absurd topknots - out into the fresh air. Like sulky teenagers they will resist this with all their considerable guile.

Washing into the machine in order to get it out as soon as the sun hits the washing line.

By this time the man who keeps the finca working has appeared.
Danilo.
He has boiled up maize overnight on his wood stove and takes it down to the pigs....who jostle and grunt with delight as it hits the troughs which he made by laying large pumpkins in wooden moulds and pouring cement round them. Ideal for cutting down on feed wastage.

Morning coffee to discuss the day. Washing out on the line.
American expats find this idea of hanging washing outside most odd. They use dryers. I find this most odd.

The skillsaw needs repair so we are taking it into the capital, San Jose. Danilo drives us into town to the bus station where, as it is still relatively early, the buses are filling up and driving off in rapid succession to get the commuters to work and we are off for an hour's scenic drive through the hills at the cost of the equivalent of one euro.

Guide books do not wax lyrical about San Jose, grizzling about its traffic and its air of dilapidation, but I like it. It has a certain manky charm. However, it behoves you to keep your eyes open. You can be walking along here 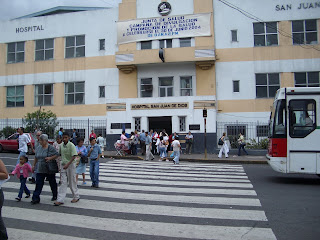 and end up here....People have an unfortunate habit of removing the manhole covers and selling them for scrap. 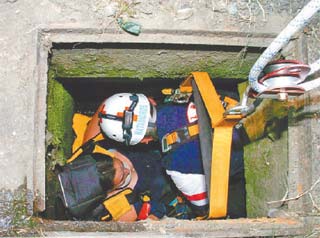 Manhole covers are not the only hazard. Unlicensed street sellers lay out large plastic sheets of knock off DVDs on the pavement, while on the kerb somewhat derelict gentlemen sell strange assortments of items garnered from sources I would rather not know about, so keeping the eyes down rather than up becomes a habit...which is a pity because San Jose has some interesting architecture.
Skillsaw put in for repair, shopping in the Central Market for fish and meat and in the wholesale Mercado Borbon behind for vegetables, topping up from illegal street vendors for coriander and sweet peppers, then back on the bus to be met by Danilo at the bus station.
Lunch at home...a stir fry....Danilo has cut sugar cane for the pigs and fed them again.
The sky darkens and I get in the washing before the afternoon rains begin, let out the layers and collect the eggs.
The postman arrives, we all have coffee and it's time for Danilo to go home with the maize to boil for the next morning. 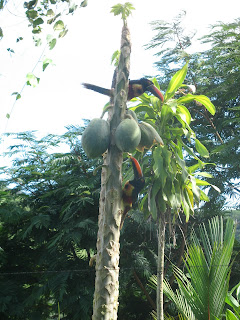 I pick any ripe papaya before the toucans can get at them.
The rain starts, and it's reading and internet time until it eases off, at which point it is time to feed the pigs again...maize meal with molasses and sticks of peeled cane...and try to get the poultry in before the rain starts up again in earnest. As always with poultry at least one group is recalcitrant and the wretched drake always manages to appear at the wrong time and send all the rest fleeing in squawking confusion.
Inevitably, if the rain has started up again, the ducks will descend to the ponds and will have to be driven up again by which time I'll be drenched.
Wet or dry, the time is getting on, dusk is setting in and it's time to close down for the night. And this is what I see from the balcony as I bring in the books and the papers. 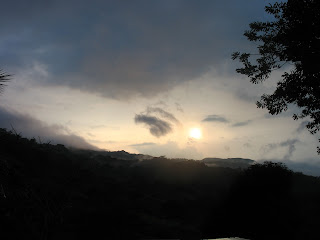