A state of emergency declared..... 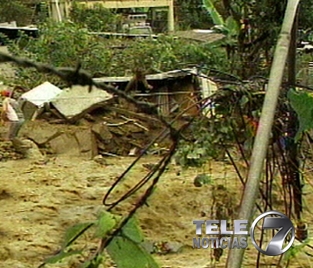 Costa  Rica has had a month of heavy, persistent rain. Major roads have been closed as the foundations of bridges have been washed away. Rivers have overspilled their banks, flooding houses and forcing people to go to shelters. The vital Pan American highway, carrying traffic from Panama to Nicaragua, Honduras, Guatemala and El  Salvador  has been cut several times.

But now, this morning, dreadful news. Tropical storm Thomas combined with a low pressure area over the Caribbean sent driving, torrential rain over the country in the night and this was the straw that broke the camel's back...at least it was in the village of San Antonio de Escazu in the hills above the capital, San Jose.

A massive landslide started, taking with it ten houses.

So far eight bodies have been found, while about thirty people are reported as missing.

The emergency services...the police and fire brigade, the Red Cross... are at full stretch all over the country where communities have been cut off and no assessment of their situation has been possible.

Access is hampered by the state of the roads...washed out in parts, dangerous in others, so what the country needs is helicopters to get help to those who need it.

But the country doesn't have any.

Not public ones, that is, for emergency use.

It has to rely on the civic sense of the institutional bodies like the electricity board and the generosity of private owners.

It has to call upon neighbouring countries.

I hope it's being put to better use today.
Posted by the fly in the web at 09:25