Someone to watch over you

We were having lunch on the balcony when the noise started, a cackle that rose in volume for about a minute before falling silent only to start again.
We had heard it before, but up in the trees among the coffee bushes, high above the house, whereas this was close at hand. Very close at hand.
The bird, the Laughing Falcon, was perched in the branches of the guapinol tree, just some eight metres away from the balcony...and this is the photograph I took. Not a brilliant photograph...but good by my standards!

The Laughing Falcon eats snakes and small rodents and there are plenty of snakes in the cafetal...the  area where the coffee bushes grow...so why was it so close to the house?

Well, two days ago we saw signs of rats near the chicken houses, so we can only suppose that the Laughing Falcon had seen them too and was on the lookout for prey.

We have always been astonished at the fearlessness of birds here....put out over ripe bananas on the balcony and the birds will descend....toucans, mot-mots, chacalacas, tanagers, flycatchers... with hardly a side glance at us, though the whirr of a camera sends them up and away for a few minutes.
The flycatchers have made two nests in the chandelier on the balcony...very eco-chic of them..so that's supper indoors until they have reared their babies. .
In France, we preserved our rooks against all comers, but there were very few other wild birds in evidence...owls, the occasional buzzard...but nothing like the company of mixed birds we had always had in gardens in England.
Blame 'la chasse'...the shooting fraternity.... and the farmers with their pesticides.

Not that people don't go out shooting things in Costa Rica...they do, but it has no organisation behind it.

Not that there are no pesticides in Costa Rica.....there is stuff being used here that has been banned for years in Europe.

As Danilo said while eating cauliflower cheese at lunch the other day......

He remembers much more wildlife about when he was a boy forty odd years ago and is convinced that pesticides are at the root of the problem...together with the advance of houses into what used to be countryside.

There are just three of us in this valley, which is down to cattle, goats and coffee and our house is on the end of the rough gravel road, so despite being so close to shops and transport we're lucky in having a real rural environment .....thus all the birds.

And I'll leave you with a much better photograph......the blue crowned mot mot....

.Just imagine having this chap five foot from your breakfast table... 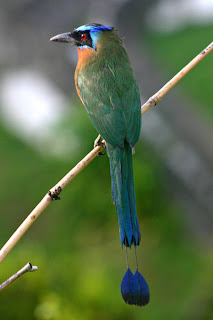