The bus into town 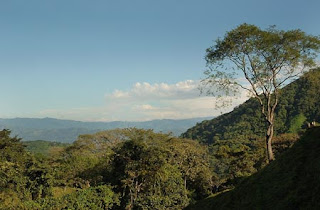 I took the bus into the capital yesterday to deal with some paperwork.

As government offices open at 7.30 am and the queues can build up, depending on the office concerned, I took a reasonably early bus.....so we were driving up the steep back road to town at about 6.00 am, the four wheel drive grumbling its way over the ruts and holes.

The views on that back road are spectacular....the stands of wild bird of paradise flowers opening up suddenly to reveal the whole valley far below, soft in the early morning light...but the highspot for me in this season is a tree with yellow fruit standing amidst the sugar cane. The form of the fruit is the exact shape of the round baubles on a Christmas tree and in the morning they glow lemon in the sunshine against the spears of cane.
Coming back in the evenings, when the sun is red below the clouds in the west, they shine brightly, a brilliant orange, the cane now just a sombre background.

Up in the town, where the feeder buses are coming in from the villages I queue as the main road buses fill up and depart under the control of the inspectors, busy checking that every seat is taken, that old  age pensioners get their half price fare and that the baggage doors are firmly shut.
None of your chicken buses here...though I do admit to once bringing back a duck in a plastic bag with its head sticking out of the top.

If you are of a nervous disposition it would be as well to disregard one of the more popular notices over the driver's position, roughly translated as
'I go with God and if I do not return it is because I have gone on with him.'

Not coming from a Catholic country, the habit of the more devout driver of crossing himself before setting out can also give rise to slight niggles of worry in the back of the mind as the bus pulls out of the town and starts to descend from the hills, swooping down the sharp bends with the front of the bus seeming to hang out over the edge of the road with a sharp drop below.

The passengers are usually sleepy at this hour, pushing the seats back to doze comfortably to the background of light music on the radio.
A few are chatting or busy with their mobile 'phones but the ones who astound me are the young ladies making up their faces.

As the bus swerves and swoops, out come the mirrors, the eyebrow brushes, the eyeshadow, the eyeliner and mascara, the foundation, the blusher, the lipstick and lip liner... all applied with an accuracy that defies belief.

Costa Rican women are generally decorative.
Finger and toe nails shine forth with wonderful designs and adornments...the woman sitting next to me on the bus had pale blush coloured nails, each displaying a bunch of three cherries. Discreet peering revealed that the toes had received similar attention.

At this hour of the morning most ladies are wearing clothes suitable for work...trouser suits for the bank clerks, polo shirts labelled with the name of the employer in the commercial sector, fairly discreet dresses....but later in the day the non workers will be flaunting their feathers.
As a cynical remark has it, their motto must be

There are some wonderful sights and large ladies do not feel in the least inhibited from wearing what they please.
I cannot imagine that anorexia is common in Costa Rica.

I always take a book for the potential queues at the offices I need to visit but, despite being a reader of the back of cereal packets if nothing else is available, I don't read on the bus.
The scenery is too interesting.

First, on one side of the bus, the views are of the far mountains and the little white villages tucked into the valleys below while on the other side the road is lined by towering bamboos, their tops curling over like young fern fronds uncurling, wild heliconias flaming beneath among the bouganvilleas, red, orange and purple.
Later, heading downhill, the views are on the other side of the bus, down into the central valley and across to the Poas volcano on the other side, crossing land laid aside for the remnants of one of the indigenous peoples of Costa Rica  where home made herbal soap is sold at one house and numerous roadside stands sell handicrafts...hats, baskets, hammocks, all, as the postman notes, bought in from Guatemala.

Then past the turn off for the U.N.'s University for Peace, where rich people's kids 'study' dispute resolution and obtain a diploma which gives them a 'shoe in' to jobs with the NGOs.
The NGO industry disgusts me...but that's another story.

Houses start to line the road, most well above it, reached by steep flights of steps, their gardens full of flowers.
People are walking along the road to the next bus stop, a few cows are being led out on tethers and dogs bound around the heels of the machete carrying men off to work in the fincas.
In the next town, a sprawling, ugly ribbon development sort of thing, the shops are open, people are breakfasting in the cafes, the little trucks are setting up on the roadsides, selling fruit and vegetables....the peach palm is in season, hands of red fruit ready to be cooked.

The road levels out and industry rears its head....motor repair shops, bigger enterprises, until finally the new office blocks appear on either side as the bus heads in through the outer suburbs.
People wake up, pull the communication cord to halt the bus as their destination looms up, the doors open back and front and the little community breaks up, heading for their working day.
The new national stadium donated by China...and, to general disgust, built with Chinese materials by Chinese workers while Costa Ricans needed the jobs....looms up across Sabana Park where it's as well to enjoy the red and purple trunks of the eucalyptus trees now, before they are felled to be replaced by native species then the bus runs into the capital proper.....the rush hour commuter train hooting to warn the traffic at the totally unguarded crossings, the concrete brutalism of the town hall looming behind the little shops and houses with tin roofs....then the new tower blocks going up in an attempt to lure the middle classes back to the centre and finally the shuffle round the one way system past the classical architecture of one of the oldest schools in the capital to the bus station, where we descend, thanking the driver, to join the bustle in the streets.