While The Men are Away... 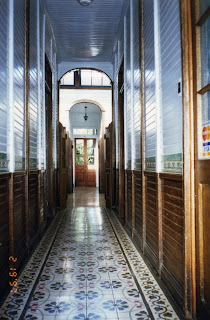 The Men are away...so far for two whole days....and it might be three.
They have started the renovations on our house in San Jose and rather than waste time travelling have decided to stay overnight.

They have installed beds, table and chairs, gas ring and a tin opener for the cans of fish which they intend to consume...a diet sure to be supplemented by the offerings of pizza and coffee at the bakery down the road, Argentinian empanadas from the hole in the wall three doors away, dim sum from the China House restaurant round the corner...and perhaps even a beer at the bar across the road.

I went to San Jose with them on the first morning...not to the house, but to the tax office, avoiding navigational disaster by demanding to be set down by the cemetery rather than trying to drive directly to the building.
They went their way and I went mine.

As it was the first opening day after New Year, there were no queues.
A most helpful gentleman listened to my explanation as to why my tax declaration was late...swallowed by the bank...and entered all the details onto my computerised file. He then gave me a disc with which to download the electronic version of the declaration, showed me how to get round two notable glitches in the programme and sent me on my way without a fine for late declaration.

The people at French tax offices used to be nice too...but they wouldn't have waived the fine.

Home by bus, picking up parcels at the Post Office on the way and then...after the first mad rush to feed the chicks, let out the ducks and hens and play with the dogs....I was on my own.

I've been on my own before....husband's spells in hospital...but this time there is not the continual worry about when or whether he will come round and the long journeys to visit him.

So this is time to do as I please...without guilt.

What have I done then?

Skype has taken a drubbing.
I've telephoned my friends and talked for ages without howls for cups of tea just as I get to the nub of the gossip.

Experimented with the camera...trying to take a half decent photograph of myself. (Thank you, Phil!)
Results variable.
Decided that yes, I definitely do have to straighten up the pair of glasses I sat on last week if they are appearing in said photograph.

Eaten tomato sandwiches for lunch and dinner yesterday, tuna sandwich for lunch today and plan to make a hot and sour soup tonight.
No cauliflower cheeses, no mashed potatoes, no stews, no roasts, no paellas.....no washing up!

Watched BBC television on the computer screen....the programmes I like.

Beaten Amazon into submission enough to download books to the computer. Celebrated by downloading Graham Robb's 'The Discovery of France' as the reviews made it sound so interesting...and was sorely disappointed. Apart from the topographical theme there was nothing new to me.
I shall stick to Susie Kelly.

Slept. My goodness, how I have slept!
No one to wake me from my siesta on the balcony so that I can see a bird which has messed off by the time my eyes are clear enough to see anything.
No one's feet acting like the screws of the Titanic's propellers and wrapping the sheets round themselves until owner of said feet wakes screaming with cramp and has to be released from the swaddling bands.
No one to ask what I think that noise might be at 3.30 am.

The Men have taken the mobile 'phone...to keep in touch. I rang them at the arranged time and got the voice mail. Tried again...same result.
Received hurt 'phone call asking why I had not rung....

Rashly asked how things are going...got it in spades.
Everything from having to search for a builder's merchant who sold sand to a mysterious collection of pipes revealed in the kitchen and a stream running under the house.

How are you coping for food?
Well, the last owner must have been an ecologist. You know how high those ceilings are? Well, he's put these eco bulbs in all the rooms so we had to cook the sausages by sound...judging when they were cooked by the sizzling...

Why didn't you eat in the kitchen? There are two strip lights there....

We've dumped the rubble in the kitchen....