The Saviour of Costa Rica....and British at that!

Costa Rica is a small country abounding in rivers...which makes travel by road a problem as these rivers need crossing, and river crossings need to have an eye kept on their maintenance.

Which is exactly what the Transport Ministry (MOPT) and the Roads Authority (CONAVI) have not been doing for several years.

As our own experiences have shown.

While we were still holidaying here we decided to take a trip to the National Agricultural School on the other side of the Central Valley and decided to go cross country to avoid retracing our steps for some forty kilometres by going into the suburbs of the capital and out again.

This meant crossing the Virilla River, carrying the pollution of the Central Valley towns down to the Pacific Ocean.....but the map showed a way across so off we went.

Costa Rica is not well endowed with direction signs, and certainly none existed on the dirt tracks which had succeeded to the asphalted roads once we left the better populated areas.

We passed a large pig farm - and were surprised that we knew and were known to the man with the tractor working there.
He gave directions.

At a junction by a mango plantation we asked again.
Down there....pointing somewhere equidistant between the two tracks available.

Down there, we came across men cutting cane.
Yes, down there.

So down there we went, cautiously as the track had turned into a quagmire after the rains.
We turned a corner, and gasped.

Turning was impossible...it was the bridge or bust - and luckily it didn't.

We arrived safely at the Agricultural School, to find it was closed to visitors, but the man selling cheese produced there took pity on us and made a 'phone call, which resulted in us having the undivided attention of the deputy director himself, giving us a guided tour of everything from artificial insemination of Bramah cattle to a crocodile farm via water buffalo to produce proper mozarella.
Scots blood might have helped...the place had been founded by Scottish veterinary surgeons before being handed over to the state.

It was a wonderful tour guided by a real expert and we had almost forgotten about the terrors of the bridge when we saw a news item on the television.

A similar bridge further downstream over the Tarcoles River had collapsed, taking a bus and its passengers into the fast flowing waters. 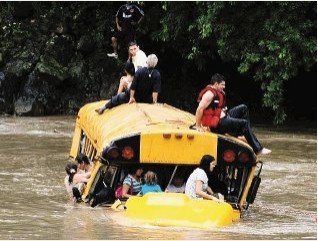 The living escaped onto the roof of the bus to be rescued by Red Cross workers and volunteers. 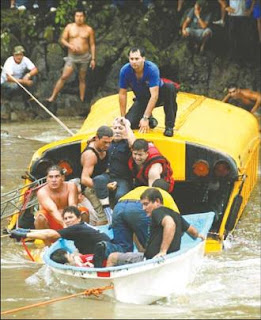 That there were only five deaths among the thirty eight passengers was due to the abnormally low level of the river.
This  video shows what crossing that bridge was like in the rainy season that year.

The bridge collapse meant that communities were cut off.....so a replacement was needed, urgently. And, as always, the answer was a bailey bridge.

These bridges, the product of British wartime ingenuity, are the mainstay of road transport in Costa Rica with at least eighty in service to keep things moving both on the backroads and on the major highway between San Jose and the international airport where lack of maintenance led to a huge sinkhole forming recently, closing half the road and reducing most of the Central Valley to gridlock until two Bailey bridges were set up while repairs (still unfinished) took place.
The bridge was designed for warfare. It was made of light prefabricated parts which could be  transported and assembled without the need for heavy lifting gear and being modular could be made as long and strong as was required by doubling up on the component parts.
It took the British army and its tanks across Africa and through Europe to final victory, the brainchild of Donald Bailey, a civil servant with a passion for bridges. An amateur.
And now, in a fine example of swords turned into ploughshares, it is keeping Costa Rica on the move, from the farmer taking his crop to market to the lorries hauling goods between Mexico and Panama on the Interamericana Highway.
But without the genius of Donald Bailey Costa Rica would be at a standstill.
Posted by the fly in the web at 14:54