As the run stealers flicker to and fro... 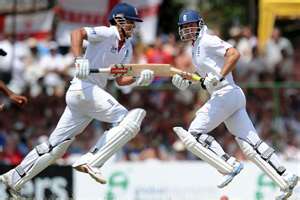 Today was the first day of the first Test Match between England and South Africa at the Oval.
This being a Thursday it was also the day when The Men would go off to work on the house in San Jose for three days.

Once they were off I could listen to the match undisturbed for the first three days....the fourth day would be Sunday when Danilo wouldn't be working...and given recent history it was possible that the game wouldn't last into the fifth day anyway.

Everything was ready. Clothes, pills, water bottles boxed overnight. Tools assembled and boxed. Smoked fish for breakfast as being the item in the repertoire requiring least attention and washing up.

Alarm clock on. We are seven hours behind the U.K.

Alarm clock giving tongue and silenced.
Dressing gown on, computer fired up, dogs let out, teabag tea made.
Play delayed by fifteen minutes...time for a shower.....then play starts and the England captain is out for a duck.
Weigh up whether to wake Mr. Fly to give him news of his side's triumph and decide against it.

Rush out between overs to heat water in the heavy saucepan.
Rush out between overs later to turn off the gas, put fish into water and cover with lid.
In the drinks interval wake Mr. Fly, give him the news and make toast and tea (properly this time).
Gobble breakfast. Pile dishes. Return to computer.

All according to plan.

Cooke and Trott are batting well. For some reason the South African bowlers aren't running down the pitch to make rude remarks to them. The umpires haven't had to intervene.

Then the telephone rings.
Cursing, I turn down the sound on the computer and answer it.

It is Danilo. He has a problem, Houston.

I pull up the page in the Daily Telegraph which gives over by over commentary and read while he speaks.

It's a problem with the car, which he keeps at his place to drive to work in the mornings.

It is a fairly modern one, a Ssangyong, with all the usual footling modern devices.
Including security devices.
It locks itself if you don't get there first.

Which is what has happened.
He was emptying it when he was called into the house by his daughter who thought she'd seen a snake.
At that moment, his dogs, excited by the squawks from the house, plunged to the rescue and, being hefty dogs and the car being parked alongside the house, made room for themselves by pushing past the open car door.
Which shut.

Excitement over, he returned to the car and found that he could not open the door...because the keys were in the ignition. Inside the car.

What about the spares?

Ah, that was the problem.
On the last visit to San Jose he had locked up the house on departure, only to discover while driving home that he had left the spare keys on the table in the house.
Mr. Fly had decreed that it wasn't worth turning round to get them. After all, what could happen?

By this time Mr. Fly had arrived and I handed over the receiver, belting out to the balcony to fire up the laptop while sparks flew over the telephone line.
Ah. Relief. England hadn't lost another wicket.

He says he'll work here this morning and nip into San Jose on the bus this afternoon to get the keys.

Hell and damnation!
Tea breaks and worse...lunch!
I had reckoned on having the remains of last night's balti for  my lunch and now I'd have to feed the pair of them.
Blast!

Upend myself in the chest freezer to find tilapia.
Tilapia found.
Sound of motorbike announces the arrival of  Danilo.

Danilo retires to the cafetal. Mr. Fly appropriates the computer. I remove myself to the laptop on the balcony.

Trott is out. Pieterson comes in to replace him.

Time for coffee. And cake. Remove myself to the computer.
Evicted at end of coffee time.
Wash up and rush back to the laptop.

Bring knife, board, plastic box and tilapia out to the balcony.
Filet and skin  tilapia.

Pieterson and Cook still there.

The  Men appear, looking for lunch. As I dish up in the kitchen I hear a roar from the laptop.
Pieterson is out!
Blast!
What happened?
They don't know how he got out, they're discussing fertiliser for the coffee.
Useless!

I serve lunch and Bell, who has replaced Pieterson, plays sensibly as South Africa take the new ball.
Play ends and Danilo takes his leave.

The motorbike returns while I am washing up.
He had forgotten that his set of house keys were with the car keys so he can't get into the house in San Jose.
I give him my spares and he leaves again.

Mr. Fly appears while I am investigating the fridge for likely suspects with which to prepare supper for two.

You'd better get something out for lunch tomorrow too. There's no point going in just for two days.
We'll put it off until next week.

Later, from up on the mountainside, I hear the sound of a car alarm.....
Danilo's wife rings.
Do we have the car keys because she tried to open the door to get Danilo's tee shirt out for the wash and the alarm went off....