I thought we might have a wander round San Jose, so first we'll drive into the city...keeping our eyes well open...


and yes, that is indeed a train you see in the middle of the road. Narrow gauge trains run through the streets at rush hours, transporting commuters  to and from their places of employment.
There are no level crossings, gates, or lights, the trains advertising their presence by ringing bells, blasting sirens or hooting mournfully depending on the engine involved.
It does not do to be listening to your music player, plugs in ears, while crossing the lines unless you harbour a death wish.
On the other hand they are a great incentive to drivers not to tailgate in heavy traffic, thus alleviating the gridlock that is the curse of San Jose.
The gridlock could have been eased had the  council not taken it into its head to revamp several of the main traffic arteries at the same time and had it thought to instruct its sub contractors not to allow their diggers to break into the water mains as the gridlocked driver is not noticeably comforted by the sight of the resulting fountains.
Nor by the presence in the road of concrete manhole covers (the metal ones having been stolen for scrap) pushed up by the force of water.
Still, it will all be over soon. The mayor will either be selected as his party's presidential candiate...in which case the money will be diverted to campaigning...or he won't......in which case he will prefer the city to be a bit run down so that he can point the finger at the new regime.
San Jose is pretty compact...look down almost any street and you will have a view of the mountains which encircle it....so a morning's walk will take you over most of it and if the legs are weary the buses are cheap. 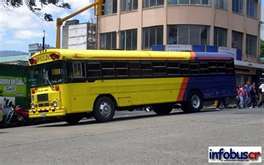 Pensioners travel at reduced cost or free, the idea being to encourage people to get out of their houses and keep lively, thus free admission to museums and galleries and reduced entrance to the theatres.
Balm to the decrepit Scottish heart....

There is the public architecture...like the central Post Office 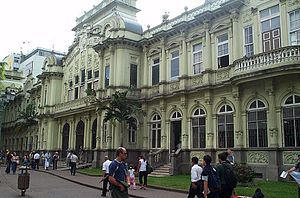 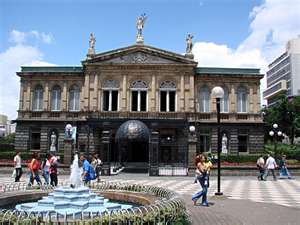 Or the National Museum, originally a nineteenth century fortress built to control the turbulent 'Josefinos' as the inhabitants are called. These days, instead of being greeted by sentries you enter the buildings through a cloud of butterflies in the plant filled entrance. Pure magic. 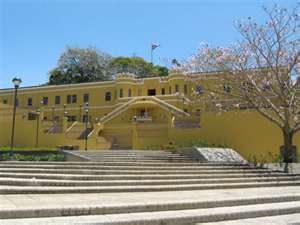 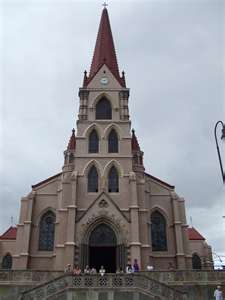 Or the domes of HolyTrinity floating over Barrio Mexico 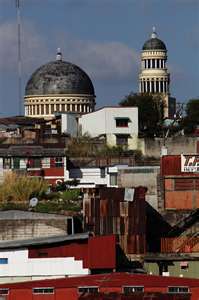 A stunning contrast to the tin sheets covering the facades of the buildings below. Which do not exist on the upmarket Barrio Amon, where the coffee barons built their mansions and which now is home to sex tourists and druggies. Still looks good though. 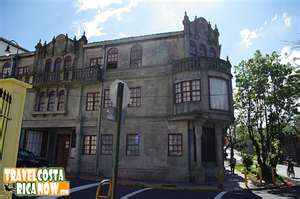 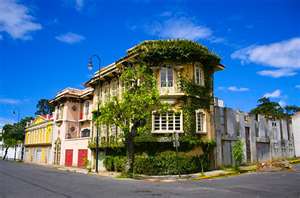 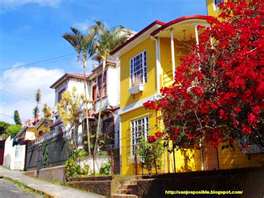 Before walking away into Barrio Otoya, past the Foreign Ministry building, Casa Amarilla.﻿
﻿ 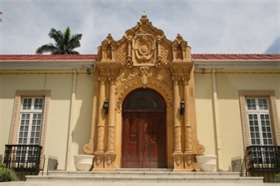 I lost my heart to a house in Barrio Otoya....from the outside....but it was not to be!
Time for lunch down in my Barrio.....at the taxi drivers' caff, open from morning to night. Good cheap food, freshest possible ingredients and a cook who can astonish you with her versatility.

﻿
And just yards away from my house.......so off for a siesta before resuming the tour another time.
﻿